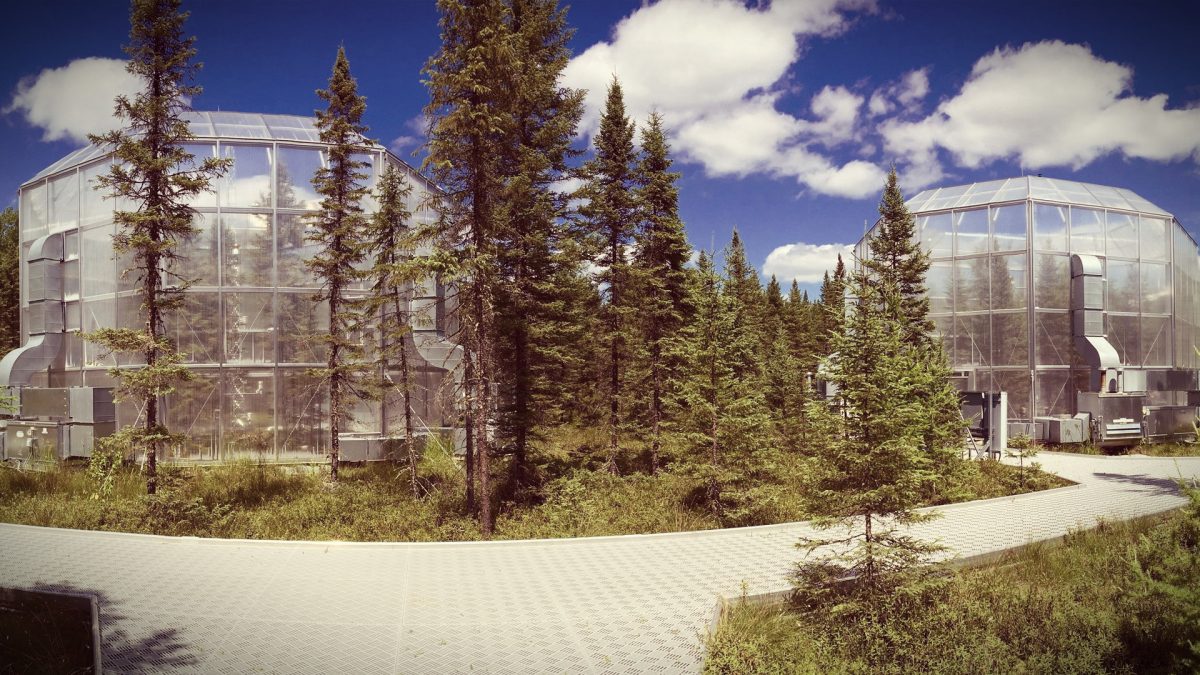 North of Grand Rapids, inside the Chippewa National Forest, is a long-term ecosystem research site. The U.S. Forest Service in cooperation with Oak Ridge National Laboratory and funding from the US Department of Energy, built these chambers in 2014 to study the peatland watersheds and their climates. There are 10 chambers, each is 26’ tall, with open roofs. They are situated on 2,800 acres of peat forest land and are part of a warming experiment called Spruce and Peatland Responses Under Changing Environments, SPRUCE for short. These large chambers were built to observe the effects of raising and lowering temperatures along with water levels and the amounts of carbon dioxide emitted in the peatland bogs.

You will be greeted by a “Welcome to a warmer future” sign as you enter these transparent walled structures filled with data retrieving instruments and cameras. They are there to collect information from the plants, soil, water, and air. You will find a similar landscape inside to what you see outside. There are differences that may go undetected. There is a warm breeze vented in to fill the chambers and underground heaters to warm the bog floors. This is making the chambers 16 degrees warmer than outside. The vegetation inside blooms much earlier than the same plants and trees outside because of this temperature difference.

Why is it so important to study these peatland bogs and their temperature changes? Peatlands are rare, making up 3% of the earth’s surface. In Minnesota we are fortunate to have three million acres of these forested peatlands. These bogs contain 30% soil carbon. They are rich in carbon because of the moist conditions of the soil. New plants are able to grow well and old ones do not decompose quickly, creating a “carbon vault”. As our environmental temperatures and water levels change, the peat in the bogs has begun to decompose more rapidly. As a result, they have begun releasing the carbon dioxide they once hoarded. It is important to understand that carbon dioxide is a “greenhouse gas”. When it is released into the environment it caused the sun’s heat to be trapped on the earth. As the earth’s temperatures rise, these bogs release carbon that has been naturally stored safely in the earth. It creates a cycle. Making matters worse, when peat breaks down it also releases Methane, a greenhouse gas that is thirty times stronger than carbon dioxide.

So far the scientist that are monitoring the Marcell Experimental Forest is seeing two changes. The bogs are getting warmer and wetter. What does this mean? Minnesota’s average temperatures have risen approximately 2.5 – 3 degrees since 1970. They are seeing winter temperatures warming about ten times faster than summer temperatures. Warmer winters? That doesn’t sound all bad until you realize the impact it has. There are plats and trees that depend on the cold and snowy Minnesota winter for survival. When we lose these types of vegetation to decomposition we are creating more carbon, thus warming our earth.
Time will tell how the chambers perform. As they push the bogs to respond with warmer temperatures the scientist will be able to alert the planet of the results we can expect as we slowly warm up.

Before You Go, Here’s A Tip:
You can visit the peatland bogs anytime. If you want a visit filled with great information on how the chambers work please make an advanced tour reservation.  https://www.nrs.fs.fed.us/ef/marcell/