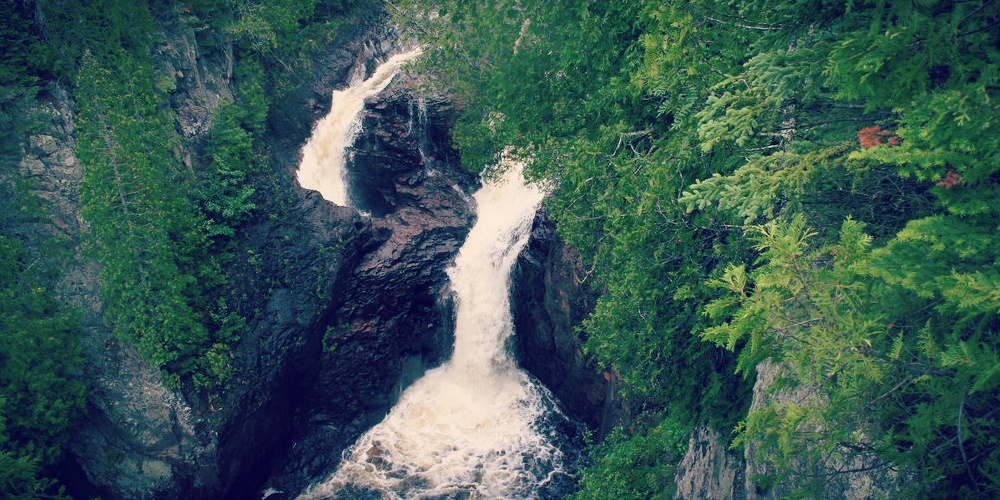 The beautiful Brule River is located in Judge C.R. Magney State Park. Boasting several waterfalls as it travels towards Lake Superior, one, in particular, has caught the attention of thousands of hikers through the years. Devil’s Kettle has kept people guessing where the other half of the river disappeared to?

As the river tumbles over the falls it is split in half by a large outcropping of rhyolite rock. The water that flows to the east and drops roughly 50’ continues moving swiftly towards Lake Superior. The water that takes the westward path plummets into Devil’s Kettle and vanishes. Or does it?

Many have speculated that the water enters back into Lake Superior through some type of underground channel, possibly a lava tube. Others believed it is held in deep caverns below the earth’s surface. Throughout the years people have tried to prove where the water from Devil’s Kettle exits back into daylight. Ping pong balls written on with a phone number and instructions to call when found have been dropped into the kettle. People have dropped logs, GPS trackers, coins, and more into the kettle in hopes of seeing where the water emerged. So far, nothing has been found.

Scientists now have a clue in solving this puzzle. In the fall of 2016, Hydrologists working for the Minnesota Department of Natural Resources came up with a simple but scientific way of determining where the water was going. What they discovered was that the water flows right back into the river it split from. They measured the water flow above the falls at 123 cubic feet per second. They then measured the water below the falls and it rolled along at 121 cubic feet per second. While these numbers aren’t exactly matching, they are essentially the same according to the variation their equipment tolerates.

But what about all those things that people have dropped into the water, never to be seen again? Jeff Green,  DNR Springshed Mapping Hydrologist, says “The plunge pool below the kettle is an unbelievably powerful system of recirculating currents, capable of disintegrating material and holding it underwater until it resurfaces at some point downstream.” Basically items get pulverized into nothing or they show up so far downstream that they are missed by those watching.

There were plans to pour a colored vegetable-based dye into the kettle to prove once and for all that the water is re-joining the river just below or close to the downstream of the falls. The plan was canceled. It is certain that if the dye were to show up just below the falls, the mystery would be fully solved and the allure of Devil’s Kettle would be lost.