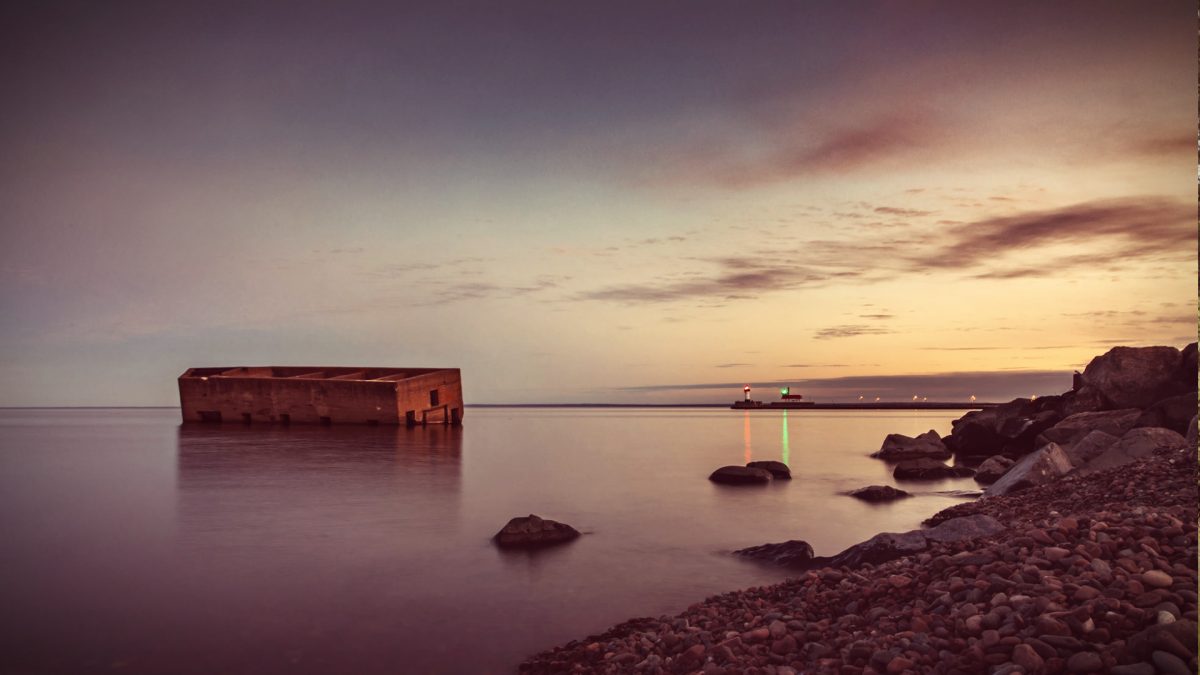 Is it a house? Was it an illegal casino or alcohol distillery used during prohibition? Maybe just an ice house? There are many who come to Canal Park and walk the boardwalk along Lake Superior. When they come to this huge concrete structure called Uncle Harvey’s Mausoleum or The Crib, they are bound to wonder what it really was.

About 30’ from shore, this sand and gravel hopper was built in the winter of 1919 by Harvey Whitney and his company The Harvey Brothers. They were looking for a way to efficiently receive their shipments of sand and gravel. His company was shipping the gravel that they would harvest from Grand Marais and sands from the islands in the lakes, mainly the Apostle Islands, into the Duluth port. Whitney believed if he could bypass the busy main shipping area by building this hopper to offload his materials. From the stone crib, a conveyor belt would move the loads onto trucks. It would have been a great operation if the lake would have cooperated.

Whitney had hoped that Duluth would build an outer harbor to help limit the rugged winds and water that battered the shoreline. At one point, in 1871, there was in existence a break wall or outer harbor built of stones and timbers. In just a few short years, due to the lack of use, and the lake-effects of harsh weather, the unmaintained break wall broke. Unfortunately for Whitney, Duluth didn’t build another outer harbor and his hopper was abandoned in 1922.

Uncle Harvey’s Mausoleum is an abandoned wonder for nesting birds, scuba divers, and those who want a refreshing swim on a hot summer day and a ledge to sunbathe on. The lake is still taking its toll on the concrete structure. The one remaining stone pillar that stood between the shoreline and the crib has washed away. Someday, the Mausoleum itself could also crumble into the waters and never be seen again.  Take some time to watch the waves roll past this monument,  skip stones, splash in the waters along the shore, or just sit and wonder if any of the other storied about Harvey’s Mausoleum could be true.